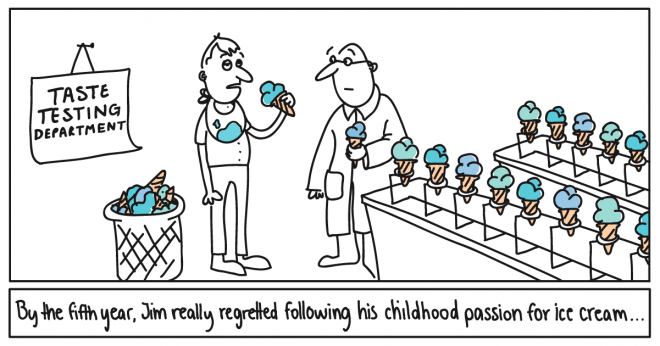 “You can have agency not just over your own life, but over a small and important part of the world. It begins by rejecting the unjust tyranny of Chance. You are not a lottery ticket.”

– Peter Thiel, excerpt from Zero to One

Passion is an empty buzzword

I heard variations of the same slogan: “Do what you love and work will be effortless.” An empty slogan uttered by well-intentioned family members and teachers around me. It took me time to look beyond it and understand that the actual word is defined by an intense feeling that drives you to be intrigued, challenged, and willing to sacrifice comfort and luxury.

There is a need to delineate between working “a job you like” versus “pursuing a passion” because they are anything but synonymous. While a passion does have the potential to morph into a career, I’ve found it is important to not go in with false pretenses that it should be one.

I made the mistake of believing that my job needed to be something I was passionate about out of the gate. Instead, it took me five years to realize the pursuit of passion is about forging your own path while still being able to financially support myself.

Growing up I rubbed shoulders with people who seemed to have an idea of what they wanted to do. A lot of these kids figured they would go to school and follow their parents’ paths as Wall Street bankers, doctors, lawyers, accountants, or as heir-apparent to their family’s business. I had no idea. So, when college application time came around I thought I had a passion for making movies and photography. Despite all the negative clickbait articles around Film being the worst major for job prospects and the nervous looks and well-meaning-yet-condescending utterances from acquaintances and family members of “Oh, that’s nice – Hollywood is a tough business – Good Luck!,” my youthful wisdom told me majoring in Film would put me on a path to pursuing a job that I was passionate about.

During my college days, I enjoyed my film classes and working on projects. For a time I felt being surrounded by talented and creative people would inspire me to do my best work. My classmates had incredible skills in their ability to use a camera and edit something that they shot. However, the stories told in their films made zero sense to me. My classmates had a tendency to believe their skills as a cameraman or editor could compensate for the lack of a coherent narrative. While the professors indulged the students to articulate their creativity, the film was graded based on technical proficiency. Was the scene properly lit? Did the audio sound good? Did the camera work catch eyes? The narrative was a nice to have and not pertinent. I experienced this flawed measurement system during a feedback session after screening my documentary on the civil-military divide that has formed since the abolishment of the draft in 1973. I formed my thesis using research from government studies, news articles, and interviewed student veterans to add personal anecdotes. My professor and classmates’ comments were not based on whether or not the narrative was coherent. The focus was on whether or not the camerawork looked aesthetically pleasing. In fact, my professor commented that she liked one shot over the other and that should I ever do a re-edit of the film that perhaps more of the same would catch the eye. I listened but was disappointed that the feedback was solely based on technical skills as opposed to whether or not my story had the power to provoke questions. I had the wrong audience. I realized that storytelling was more important to me than aesthetics.

I took a couple of journalism classes and was given a homework assignment for class that fired me up. The homework entailed finding a story within the community and interviewing people about the topic. I had the opportunity to go out to Lowell, Massachusetts, to make a behind the scenes video for a semi-pro musician friend’s band. I ended up killing two birds with one stone because the space that the band performed in had a history as an old textile mill at the turn of the 19th century into the 20th century. I was able to interview the property owner and learn about the history of the building and how it was repurposed to house artists and tradesmen. That homework assignment gave birth to Finndings: a travel blog aimed at profiling people, places, and events that are not well-known to the average traveler. Building and curating Finndings inadvertently taught me the digital marketing skills that eventually helped me get my first job in the world of software marketing.

Marketing was cool for a bit. It occasionally let me use my storytelling chops and those were the albeit brief moments of fun I had in the roles I took. I rationalized doing the work I didn’t like with a pipe dream of helping “revolutionary companies change the world” while earning a respectable living to continue working on my own stories. To combat the frustration of working on projects like managing marketing databases and campaigns, I escaped on the weekend using Finndings. Living in Virginia came with spectacular scenery and lots of history. I used my platform to profile interesting scenes that I found while venturing with friends. These projects gave me a small taste of being a professional storyteller. Every time I finished writing and editing the photos and video, the time and dedication it took in producing the story always left more to be desired. While respectable, Marketing requires a lot of shit to be done with little-to-no appreciation so I made another pivot. Sales looked like a place to not only be appreciated for your effort but to also see the rewards of your discipline and persistence.

Unfortunately, I realized layoffs and burn-out make sales and marketing hard places to stay. Every time a company has their shit quarter(s), those functions are the first to get fucked. No disrespect to anybody who works in those functions, I respect the hell out of anyone who stays within Sales and Marketing! Both require a cocktail of confidence, humility, and the drive to reinvent one’s self. For me, I realized I had to take a different path. My passion for telling my own stories had grown and my ability to feign enthusiasm for stories that did not interest me to tell had diminished.

While one could say I should be grateful that I even had a chance to turn my youthful passion for storytelling into a job, I realized that I had a problem. I was telling stories that DID NOT interest me. While I appreciate the learnings from my former employers, my attitude towards storytelling as a whole soured.

I was becoming cynical and had even stopped writing for Finndings for a time. The blogs I was asked to write for work were preaching revolution, but in reality, they were trying to convince people to buy the company’s products and services. Dealing with branding managers who preferred to stick to “defense as the best offense” when it came to putting out content was galling. I was disheartened by stringent brand guidelines that were used as a weapon to squash creative and provocative storytelling voices. In fact, I saw this in action when I was working on a marketing campaign called #ShareNoMore which promoted the company’s Private Cloud computing offer. Our team was spearheading this campaign and created videos, ads, and marketing material that captured an abstract and dull topic in a fun and provocative way. This content would have been a stark contrast to our competition who used highly technical, generic, and relatively boring messaging that made their offering look the same as ours. We were just a day or two away from launch until we were stopped by a brand manager half-the-world away who forced us to stick to the same, stale messaging used by the company for the last 10 years. All of that work for nothing. This is one of the big reasons why the articles in Fast Company, Inc, and on LinkedIn, display a disturbing pattern. The articles are short, banal, and all sound the fucking same (i.e. “10 things to do when starting a business” or “The 5 Qualities of a Good Manager”). These articles masquerade as thought leadership but in reality, they are just noise for the sake of grabbing attention in a crowded social media ecosystem.

Maybe therein lies the problem. The problem with content marketing today is that everybody is competing for attention even if they truly have nothing of importance to say. Just regurgitated bullshit – empty marketing at its finest (hello Instagram). Unfortunately, marketers get caught up in the SEO game that prioritizes the adding of keywords to compete for a coveted space in the top five results on a Google search. Picture a great story as a racecar trying accelerating you to the finish line of the story. You want to play it safe by hitting your brake pads every time after you accelerate. That’s how it feels when you read a blog post with a keyword every few sentences. To be honest, I am confident that your reader/viewer/listener will find you, as long as you have a good story to tell. You don’t need the crutch of SEO keywords and a search engine algorithm. My saving grace came when the universe and his disciple, the god of storytelling, decided to arrange my layoff. From there, I realized I can find the stories that I want to tell rather than wait for someone to hand it to me on a silver platter.

I am an unintended entrepreneur

I never intended to start a business. My experience as both a marketer and sales rep, along with my storytelling experiments through Finndings propelled me to start Minitrue Storytellers in 2017. Finndings was always meant to be revenue-neutral. I had a few loyal followers who liked my posts online when I pushed out a new entry. One day one of my readers reached out to me to pick my brain on a project she envisioned and wanted my advice on how to make it possible. Those conversations led me to partner up with her and build her storytelling platform in under 90 days. By Spring 2018, she was getting her story out there which led to more clients contacting her for her advice.

It was my unpaid writing through Finndings that forced me to focus on quality storytelling and figuring out what captures a reader’s genuine attention. This in-turn forces the reader to care about the story and appreciate the power of the narrative. This is the foundation by which I’ve been building Minitrue on for the last three years. My vision is to help small business owners tell genuine stories that not only impact their bottom line but build a unique voice that helps them capture the hearts and minds of consumers trapped in a crowded marketplace of sameness.

In case you skimmed the above, here they are:

It took me eight years to see a dollar from my passion project. It might take you less time than me if you play your hand right. 😉